On Tornados and Extreme Weather, Biden Is Wrong (Again) In the aftermath of the terrible and deadly multiple tornado strikes across several states on December 10, President Joe Biden and the woke parrots on his climate team wasted no time in linking the recent tornado disaster to climate change.

In his Saturday morning media briefing discussing the tragedy, here’s how Biden responded to a question about whether the timing and severity of the tornadoes were due to climate change:

Well, all that I know is that the intensity of the weather across the board has some impact as a consequence of the warming of the planet and the climate change. …

The specific impact on these specific storms, I can’t say at this point. I’m going to be asking the EPA and others to take a look at that. But the fact is that we all know everything is more intense when the climate is warming—everything. And, obviously, it has some impact here, but I can’t give you a—a quantitative read on that.

With Biden’s marching orders in hand, the U.S. Environmental Protection Agency is diverting resources from monitoring air, water, and toxic waste pollution across the nation, the job it is charged by law with doing, to investigate the role of climate change in the recent tornado outbreak. I have no doubt that Biden’s climate-alarmed EPA will attribute the tragedy to human fossil fuel use even though no such link exists, as discussed below.

Deanne Criswell, Biden’s administrator of the Federal Emergency Management Agency (FEMA), was even more emphatic in placing the blame for the December tornadoes squarely on climate change.

“This is going to be our new normal,” Criswell announced on CNN’s State of the Union. “The effects we are seeing of climate change are the crisis of our generation.”

While acknowledging it is not unusual for tornadoes to strike in December, Criswell asserted “at this magnitude, I don’t think we have ever seen one this late in the year.”

The facts show Biden and Criswell are simply wrong.

In its recent Sixth Assessment Report, the U.N. Intergovernmental Panel on Climate Change finds no evidence most weather events are becoming more extreme, including tornados. As detailed in a summary of the IPCC’s conclusions on extreme weather by the University of Colorado’s Roger Pielke Jr., “it is simply incorrect to claim that on climate time scales the frequency or intensity of extreme weather and climate events has increased for: flooding, drought (meteorological or hydrological), tropical cyclones, winter storms, thunderstorms, tornadoes, hail, lightning or extreme winds (so, storms of any type).”

Concerning tornadoes in particular, the IPCC states, “There is low confidence in observed trends in small spatial-scale phenomena such as tornadoes.” 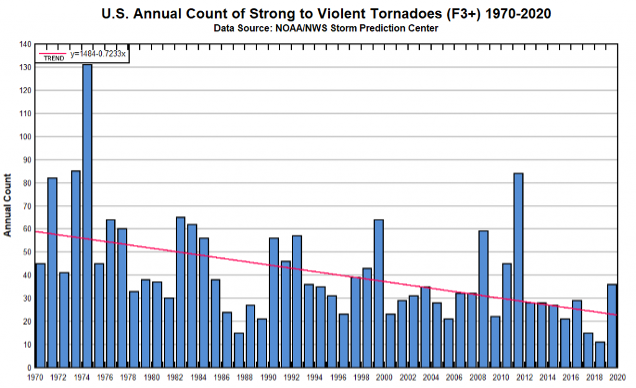 Indeed, from 2017 through 2018 the United States set a record for the longest period in history without a tornado death. The nation also went 306 days between 2017 and 2018 without experiencing an F3 or stronger tornado, setting a record for the longest such period in recorded history. Interestingly, the two years that set the record for the lowest number of tornadoes, 2014 and 2018, occurred in the last decade, which climate alarmists have repeatedly claimed to be the hottest on record. Even counting the recent December tornadoes, the number of tornadoes recorded in 2021 is below average.

For Criswell to claim “at this magnitude, I don’t think we have ever seen one this late in the year,” displays a woeful, likely willful, ignorance on her part, indicating her statements are intended to gin up support for Biden’s climate agenda in Congress and among the public at large rather than reflect the truth.

In 2015—just six years ago—on December 26, 27, and 28 a weather front produced multiple tornadoes across a wide swath of the Southern United States, centered mostly in North Texas. On December 26 alone, 32 tornadoes of various strengths struck North Texas. One tornado, an EF4, struck very near my home in Rowlett, Texas, destroying more than 400 homes and 22 businesses, injuring more than 400 people, and killing 10. On December 5, 1953, when the Earth was entering a cooling period, an F5 tornado devastated Vicksburg, Mississippi, killing 38. On December 18, 1957, an F5 tornado struck Sunfield, Illinois, killing 13, at the beginning of a three-day series of tornado strikes across the South and Midwest.

Doddering Joe, with his flagging grasp on history and day-to-day life, may be excused for not remembering a terrible tornado outbreak in late December just six years past, but there is no excuse for Criswell’s ignorance. If she does have this limited a grasp on tornado occurrences to which the agency she heads was deeply involved in responding, she is unqualified to lead FEMA. Criswell was probably aware of these past events but chose to ignore them for political reasons, which is shameful though not surprising, coming from a Biden administration that constantly “disappears” any climate data that undermines alarming claims about recent extreme weather events being unusual. That, too, disqualifies her for office.

Instead of trying to promote their climate change policies by “not letting a disaster go to waste,” to paraphrase Democratic operative Rahm Emanuel’s famous dictum, the Biden administration should do its job of providing comfort and aid to the people suffering in the aftermath of these storms. That’s the moral choice.

Stossel filed his lawsuit after so-called fact-checkers from the group Climate Feedback, which Facebook uses to police climate change posts and comments, labeled two of his videos discussing climate change as “misleading” and “partly false.”

These labels resulted in Facebook limiting access to and promotion of Stossel’s videos. The number of viewers fell from more than 24 million for one of the two disputed videos to almost zero for all the videos on Stossel’s Facebook page platform.

Stossel reached out to the Climate Feedback personnel for clarification, to determine what “facts” he supposedly got wrong. Climate Feedback confirmed that he got no facts wrong. They flagged the posts because Stossel had, in their opinion, ignored context they felt to be critical to present the facts properly. Stossel argues he shouldn’t be punished for saying something false if nothing he said was false. What constitutes the appropriate context for a statement is a matter of opinion, not facts.

With this admission in hand, Stossel tried for more than a year to get Facebook to remove its labels and stop restricting access to his videos. They refused. He sued.

They establish that when Facebook labels a post as “false,” “misleading,” or “partly false” and restricts or removes access to a post or ad or establishes links to additional information Facebook thinks is important on a private party’s Facebook page, such actions are based not on fact checks but merely on the opinions of Facebook’s designated fact checkers.

My colleague, meteorologist Anthony Watts, notes that on Page 2, Line 8 of Facebook’s legal response to Stossel’s defamation claim the company asserts it cannot be sued for defamation (which is making a false and harmful assertion) because “[t]he labels themselves are neither false nor inflammatory; to the contrary they constitute protected opinion.”

There you have it—game, set, and match. You can’t honestly (and one would hope legally) call something a fact check on one hand and then say on the other it is merely opinion. Opinion may be protected, but it has no place on Stossel’s Facebook page unless he approves it and places it there, and it cannot justify a self-designated common carrier thwarting access to it in any way.

The press has largely ignored this filing, but it has broad implications well beyond Stossel’s lawsuit. Other Facebook users whose posts have been labeled fully or partly false or misleading or who’ve had their posts removed or access to their page blocked or limited may, if they challenge the assertions in court, find they too have been maligned or slandered based solely on the opinion of someone who thinks the facts they presented must be suppressed for personal or political reasons.

This filing will make it hard for Facebook ever again to claim its fact checks are factual. The legal admission also makes it difficult for Facebook to claim, as it has repeatedly done, it is solely a neutral arbiter of content, not acting as an editorialist or content provider.

This may mean Facebook has entered firmly inton the realm of publishing, which could open it up to challenges under Section 230 of the Communications Decency Act, which shields websites from liability for third parties that post on their sites.

I’m not a lawyer, but it would seem common sense that this liability protection can hardly shield Facebook from legal claims if they solicit or specifically sanction third parties to act as fact checkers and comment unbidden on other peoples’ pages. That is especially true if the sanctioned third-party fact checks are treated as dispositive, with the social media giant  using the results to suppress or add material (such as content warnings) to people’s posts.

If people want to allow fact checkers to review their posts, that is their business, and they can extend friend requests to them, treating them as they treat others they allow to join their friend circle on Facebook. If Facebook inserts itself into the process by allowing or engaging third parties to check people’s posts, Facebook is acting as a content provider, instead of merely a platform provider, and forfeits Section 230 protection from lawsuits for defamation and other offenses.

Virginia governor-elect Glenn Youngkin announced he will use his executive power to remove the Virginia from the 11-state Regional Greenhouse Gas Initiative and its costly cap-and-trade program, to the extent possible under his authority.

The RGGI requires power plants to purchase an allowance to emit specified levels of carbon dioxide, raising the costs of traditional power plants relative to intermittent wind and solar facilities. Despite the best efforts of climate activists, Virginia resisted joining the RGGI for more than a decade. It wasn’t until Democrats gained control of both houses of the state legislature and all statewide offices, including the governorship, that a law was passed approving Virginia’s joining of RGGI.

The RGGI considers the costs of allowances purchased to comply with the law to be environmental compliance costs, allowing them to be passed on to ratepayers. Youngkin estimates these pass-through RGGI costs would add $1 billion to $1.2 billion to ratepayers’ bills over the next four years.

Based on early statements from Virginia Del. Todd Gilbert (R-Woodstock), the incoming speaker of the House after Republicans regained control in the November election, it seems Youngkin’s efforts to withdraw the state from RGGI will receive a warm reception in that chamber.

“Governor-elect Youngkin’s announcement is a perfect example of the common-sense decision making we’ve been missing for the past eight years,” Gilbert told the Washington Times.

It is unclear whether Youngkin will be able to remove Virginia from RGGI or limit RGGI’s impact on ratepayers through executive action alone. Democrats still control the Senate and support RGGI.